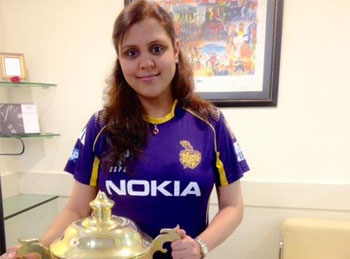 Saloni Ganesh is the Chief Operating Officer (COO) and Chief Financial Officer (CFO) of ‘Kolkata Knight Riders’ (KKR), one of the most successful and popular Twenty-20 cricket franchise of Indian Premier League (IPL). KKR is a privately owned entity of Bollywood superstar Shah Rukh Khan and his business associates.

The credentials of KKR team are unmatched: two time IPL Champions (2012 & 2014), finalists of the Champions League (2014) and among the first IPL teams to break even and turn profitable. The KKR franchise has emerged as the strongest brand in terms of valuation vis-à-vis its competitors, taking into account various revenue lines such as broadcasting, IPL sponsorship fees, team sponsorship fees, merchandising revenues, gate receipts, local fan following and the presence of iconic players.

Saloni has been associated with KKR since 2009 and is a key member of its leadership team. She has over a decade of experience in accounting, finance, taxation, business strategy, corporate restructuring, risk management, commercial and compliance matters. She has also worked closely with finance heads of other IPL cricket franchises to represent on industry matters before various ministries of the Government of India. She had led the commercial discussion for the acquisition of ‘Trinidad & Tobago (T&T) Red Steels’ team participating at the Hero Caribbean Premier League (CPL T20 tournament). She was recently given the additional charge of being the Chief Operating Officer of the team a move that solidified her importance to the franchise. Prior to KKR, she was working with an Essel group promoted prepaid cash card company, ‘ItzCash card’ where she managed private equity funding and investor relations.

Saloni is a qualified Chartered Accountant from The Institute of Chartered Accountants of India (ICAI) (2004) and a graduate in Commerce from Narsee Monjee Institute of Commerce & Economics (2002). She has been an active academician and conducted sessions on Financial Management and Accounting at various Management Institutes in Mumbai. She has received recognition from University of Mumbai to teach for MMS, MMM and MFM post graduate courses in Management studies. She has also conducted sessions at the General Management and Communication Skills (GMCS) course conducted by ICAI and at the Regional Training Institute (RTI) of Indian Audit and Accounts Department for senior managerial level Government auditors.

She is a recipient of the National awards for CFO excellence presented by Chartered Institute of Management Accountants (CIMA) in the category of ÇFO in Sports and Entertainment industry in July 2015. She is a recipient of the Golden Globe Tigers Award organized by CMO-Asia in the category of ‘Women Leadership Award for excellence in Accounts & Finance’ held at Kuala Lumpur in March 2015. She is a recipient of the recognition conferred by the Committee of Members in the Industry (CMII) from ICAI at the annual ICAI awards and Corporate Conclave held in February 2015 for the valued contribution made at highest financial management level in the industry.

Saloni is passionate about teaching and is keen to make a contribution in the world of education and academics. She follows the game of cricket keenly and would like to promote participation of women in sports.