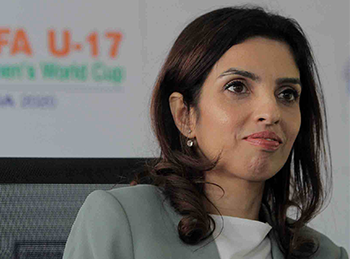 Ms. Roma Khanna is the Tournament Director of FIFA U -17 Women’s World Cup India 2020 which will be the first FIFA competition for women in the country and the second overall to be held in India.

She has been working at the All India Football Federation (AIFF) in various capacities over the last decade. Among them was being the Director for special Projects and Infrastructure of the AIFF. She was also part of the Local Organizing Committee for the FIFA U17 Men’s World Cup as the head of Venue Operations.

Prior to joining the FIFA Masters Ms. Khanna was the Chief Cricket Correspondent for CNN IBN.

The FIFA U-17 Women’s World Cup