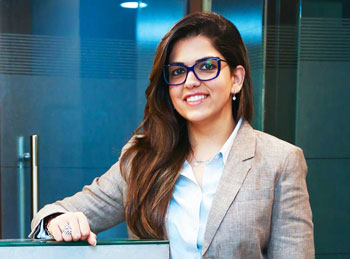 Ms. Aahna Mehrotra is the Founder and Principal Lawyer at AM Sports Law and Management Co. She was called to the Bar in May, 2011 and has gained considerable exposure through her experiences at different institutions worldwide.

Aahna set up AM Sports Law and Management Co. in May, 2017 and both, her practice and team, have grown manifolds ever since. She is actively involved in the day-to-day affairs of the business of sports. Apart from working on matters in various High Courts across the country and the National Anti-Doping Tribunal, she regularly advises clients on matters relating to league formulation, transfer of players, selection disputes, arbitration, intellectual property rights, media and broadcasting rights, sponsorship and merchandising agreements, fantasy sports and contract law. She has been instrumental in setting up some of the major franchise-based leagues in India and serves as a visiting faculty at several institutions of repute. She is a member of the Arbitrational Tribunal constituted by a state football federation. Amongst her most notable publication is co-authoring the second edition of the book ‘Law and Sports in India’ published by LexisNexis.

Having been chosen to play cricket for the India Under-19 women’s team and several other sports at the state level, Aahna always had a strong desire to club both vocation and passion and hopes to make a marked contribution in realizing the Indian Olympic Dream through her various engagements. Keeping this goal in mind, she regularly participates in sports conferences and seminars, both, in India and overseas.